Why Mary? And why apparitions? Similar phenomena have been reported throughout history, often coinciding with major world events.

Many of the apparitions were investigated by the Vatican and given Church approval. Some famous examples include: 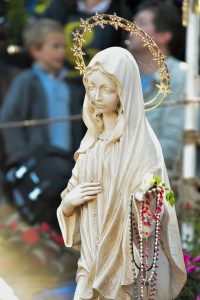 In 1531, an Aztec named Juan Diego saw the Virgin Mary on a hill in Guadalupe, Mexico. The visions—and a miraculous image left on Juan Diego’s cloak—inspired the indigenous to convert in droves.

In 1858, a miraculous spring appeared in Lourdes, France, where Mary visited a peasant girl. Millions of people still make pilgrimages to Lourdes every year.

In 1917, Mary appeared to three shepherd children in Fatima, Portugal and entrusted them with a secret that accurately predicted WWII and the rise of Communism.

And in 1981—the same year as Medjugorje began—several schoolgirls in Kibeho, Rwanda claimed the Virgin appeared and showed them prophetic visions of “neighbors killing neighbors with machetes, and bodies floating in the river.” A decade later, a million people died in the Rwandan genocide.

The apparitions of Medjugorje have been occurring longer than any of these did. In addition to imploring people not to ignore “the signs of the times,” the Virgin also once told Mirjana, “I will never again appear on Earth in this way.”